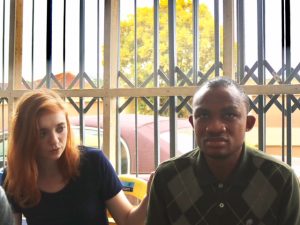 It was like sitting across from a stone. Sporadically he would blink, rock back and forth, and occasionally glance around. But mostly he just sat there, staring straight ahead, uninvolved and detached. I bustled back and forth, handing out registration forms to kids. We had passed out meat pies earlier and some of the children who are used to being without food were hoarding them. Even so, they thanked me in their native language of Yoruba or in their broken, sweetly accented English. No matter how busy I got with the children, I still tried smiling and waving at him several times. He offered no sign of having seen my pitiful offering of friendship.

Sheo and I had met before one full year ago to this day. Most people would have run to greet me after a year apart. However, Sheo is a 38 year old autistic man, and I am a 19 year old neurotypical woman. There would be no warm hugs between us for more than one reason. I kept glancing at him while I did my work. His mother gleefully talked with me as I labeled dozens of forms for the boisterous meat pie hoarders. 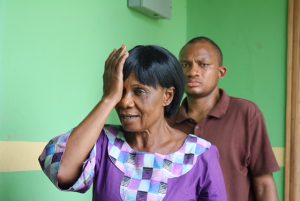 Sheo and his mother

Finally, I reached a lull in my work. Every child had been documented and their paperwork filed away. Their reaching hands had pulled me in every which direction for pictures to be taken with their cell phones. After being swung around a few times, I found myself with camera in hand, standing face to face with a still unwavering Sheo. His face was as impassable as ever. I stood thinking for a few short moments, and then grit my teeth in resolve. I determined in my heart to make sure he would acknowledge me before the day ended! No matter how long it took, I wouldn’t give up.

I sat myself gently in the chair next to him. I was careful not to jostle him or speak too loudly, and started to click through the pictures on the camera hoping to stir his curiosity. Soon, I felt his eyes turn ever so slightly towards the tilted screen of the camera. He matched the brown faces on my camera to their mirrored images peering at the white women around the room. Dozens of little eyes followed my every effort to befriend this man. Everyone wondered what might happen.

I was called back to my work, as another two dozen children entered the muddy reception area. I sprung from my chair to spread more love and label more forms. Fifteen minutes later, I had this group finished up and ready to go. After many shows of overstimulation from the activity of the room, Sheo and I found ourselves back in our original positions; him sitting quietly in his chair and me staring at him from across the room. 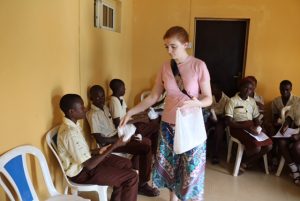 That’s when it happened! His eyes flicked to the camera in my lap, then back up to meet mine. He had acknowledged me! A grin spread across my face and I went to sit beside him again. We concluded our meeting by looking at more pictures and tapping our toes to a rhythm only he could hear (much to the delight of our audience).

Sheo didn’t show any signs of recognition when I saw him again at the end of the trip. That’s ok, though. In my heart I know he remembers the lady who ran around working, taking pictures of rambunctious children, and tapping her toes to his unique beat. The MOYA Foundation thrives on these moments. The recognition and spark of hope in the eyes of children with special needs is the very reason we exist.

Sheo is only the beginning of hundreds of precious lives who will be filled with a new hope.