Snails, Relationships, and the Heart of the Father

Husband of a Different Color

Back in 1999 Bill and I were celebrating our third wedding anniversary. A friend had given us a gift card for a romantic dinner at the elegant Dierdorf & Hart’s in St. Louis. We were young and in love and thrilled at the promise of the delicious food that was awaiting us!

It’s in my nature to adventurously try new things, especially when it comes to food. Imagine how eager I was to order escargot for the very first time! The waiter brought out a dish with six half-moons containing an individual piece of escargot, each one filled to the brim with the most delectable garlic butter I’d ever tasted. The texture was tender, the taste divine. The most delectable garlic butter I’d ever had provided the perfect vehicle to escort the escargot over my tongue and down into my stomach.

I was in a taste bud stupor, barely noticing poor Bill. When I finally opened my eyes to comment on my blissful appetizer, I saw before me a pea soup green rendition of my husband, the color crawling up from his collar and slowly taking over the rest of his face. I seemed to detect a slight gurgling sound coming from him, but whether its origin was from his throat or stomach, I couldn’t be sure.

Let’s just say that my husband did not share my exuberance for the escargot, and leave it at that.

Fast forward to the trip for the first MOYA Centre in Nigeria during the summer of 2015. We had a wonderful guide in Dr. John who introduced us firsthand to the native sights, sounds, and people of his country.  We were making our way to Prayer Mountain, where we were planning to visit with a pastor and his wife.  On the side of the road I spotted a lady selling something out of a precariously balanced bowl. Much to my surprised delight, I discovered that the bowl contained GIANT snails that we could purchase to eat. Enormous, meaty, full of promise snails nearly as big as Bill’s fist! 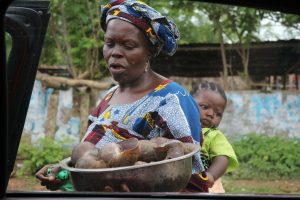 This is the woman selling the snails.

Let me just tell you, folks, the thought that ran through my mind was that God did indeed love me. Exponentially. He had taken a tiny little snail that I had so adored back in 1999 and multiplied it like the loaves and the fishes right here for me in 2015.

Dr. John exchanged comments with the lady back and forth, eventually turning to me and breaking the news that we would not be purchasing any of her snails because her price was too high. My stomach grumbled and my heart did a sad flip flop of disappointment. We waved goodbye to the lady and resumed our drive to the Pastor’s house.

Upon our arrival we were invited to lunch with the Pastor and his wife. I shared with the pastor’s wife my disappointment in the near miss of deliciousness with the snails. She smiled brightly and informed me that she had prepared some snails just like this and that she would be happy to serve them with our dinner.

Scripture tells us that God truly does delight in giving us the desires of our heart. When life tries to get in the way of that, He will pull strings to make sure those desires make their way into our hands.

The Team sat down at the table and our hosts began bringing out appetizing looking dishes. Of particular interest to me was a platter of chicken smothered in a gorgeous spicy red sauce. I could not wait to sink my teeth into a piece of it. Though, before I got a chance to, a steaming bowl of the much awaited snails was placed right in front of me.

I speared one with my fork, not even pausing to cut it with a knife, so great was the anticipation.  I didn’t even mind the total absence of garlic butter. Placing one end directly into my mouth, I chomped down with my teeth, expecting results completely different than what I got.

Someone at the opposite end of the table just happened to speak, drawing all attention away from my general area, Thank Goodness. I would have pitied anyone who might have had the misfortune of watching my face play tug-of-war with my fork on this rubbery, elasticated piece of snail that refused to be separated into bites by my teeth.

I gave up on the tugging and gnawing and began a sideways sort of sawing motion. Eventually I managed to sever off a jagged bit of snail into my mouth.

Chew, chew, chew, smile at someone, chew, chew, pause for dramatic effect, chew-chew-chew fast, and then rest the jaws. Rinse. Repeat. I was smart enough to use my knife for the rest. The taste wasn’t bad; it just wasn’t there. It was like eating a very bland rubber band.

The pastor’s wife asked if I was enjoying the snails. Now, Dearest Reader, let me be clear. The fact that these Nigerian snails didn’t taste like the escargot I had eaten back in St. Louis did not mean she was a bad cook. She prepared the snails just right in the traditional Nigerian fashion. The problem was with my Americanized taste buds and remembrances of that garlic butter!

I assured her that they were… a great experience. And to prove it I even took a second one off of the platter and began the intensive manual labor required to cut it into manageable bites. Finally, I finished off the second snail. I was relieved to have that out of the way and to now be able to move onto what I was positive would be rewarding; that intriguing chicken in spicy red sauce.

For Cheep’s Sake, This is Good!

I piled a heaping mound of it on my plate.  Propping my elbows on the table, I began. From the second that first morsel of chicken hit my tongue, my taste buds were redeemed! The sauce was as scrumptious as it looked. The chicken was tender and melted in my mouth. I consumed the first piece all the way down to the bone, started a discard pile, and immediately dove right into a second piece. I drifted into a poultry induced trance, the others at the table fading into a soft, unrecognizable blur around me.

As I neared the end of my first portion of chicken, I began to visually scout out the serving bowl to see how much was left and how much of that I thought I could maneuver onto my plate.  Slowly I became aware of the gazes of those who were sitting around me. Most everyone had paused to stare at me with an amused smile, while my team looked slightly uneasy. Wondering what was going on, I smiled tentatively back at everyone, uttering a little “Mmm,” while holding up my chicken. It was at that moment my food stupor cleared away like an early morning fog and my eyes lost their glossed over appearance.

Bill was trying to signal me by burning two holes into my hands with his eyeballs. I looked down at myself. That red lava-like sauce had pooled underneath each finger nail, found its way down my fingers, and dripping into the palms of my hands, was making quick headway past my wrists and to my elbows. Apparently, the tops of my hands had also rolled around in the sauce when I wasn’t looking. I knew that my teeth and lips were covered and showing the same true signs of carnage. Flecks of sauce dotted my shirt, and I won’t even begin to describe the table around my plate. I gave new meaning to the verse that says taste and see that the Lord is good! I ranked right up there with toddlers and spaghetti, guys. My eyes darted around only to discover one solitary little napkin.

The pastor’s wife spoke discreetly to a young lady who disappeared into the kitchen only to return with my very own bowl of washing-up water and roll of paper towels. I couldn’t do anything other than laugh while I cleaned up.

As we were preparing to leave, the pastor’s wife drew me close embracing me with a genuine and honest hug. She smiled into my face before letting me go completely, and said, “I love you!”

This wasn’t typical behavior for the culture she was a part of. Theirs is a more formal way, to use one arm around the shoulder with a few pats on the back. Her hug touched me deeply. In retrospect, here’s what I think happened: I believe they had no idea what to expect from the visiting Americans. I’m sure they wondered what we would be like, how we would treat them, if we would view them as peers and friends or lesser-than-us types.

We certainly didn’t know what they thought of us and our Western ways. We went to Nigeria with our own set of unknowns, as well, but eager to learn about the differences in our cultures.

I believe my behavior, although funny in an “I Love Lucy” sort of way, more than likely tore down preconceived ideas on both our sides. I believe that God used one single meal to create an instant bond between the pastor’s wife and me… something that would normally have taken several visits.

This is what The MOYA Foundation wants to do in Nigeria; tear down superstitious walls that have surrounded children with special needs in that culture for decades. Shred the archaic ideas that these children are less-than. Create an atmosphere of acceptance while driving out fear. Inspire full on hugs and spontaneous I love yous. 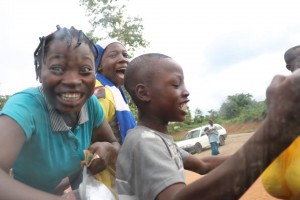 When Africa is mentioned in America there are many images[...] 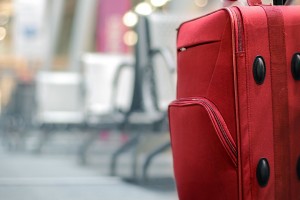 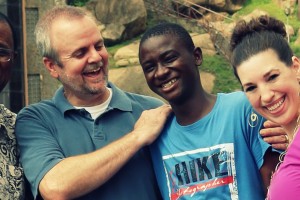 Below are a handful of pictures from our time visiting[...]